On the 28th of June, REGILIENCE organised a workshop titled “National Adaptation Plans and Strategies in the Theory and Practice – Role of the National and Regional Governments” to discussed how present and future EU policies drive the necessary changes on the ground as well as lessons learnt from the processes of the drafting, implementation, and monitoring of the National Adaptation Strategies from several EU Member States. 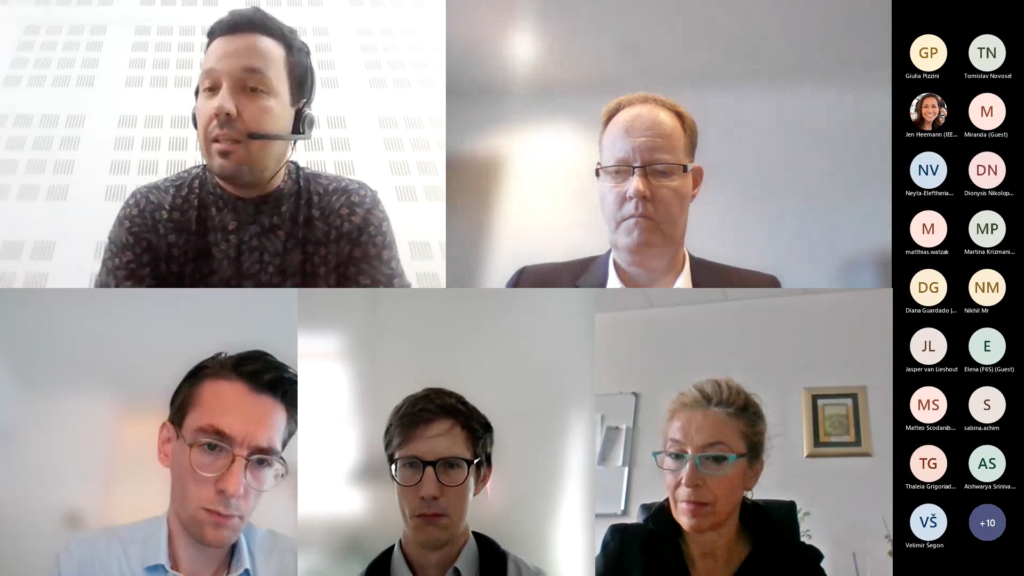 To kickstart the workshop Johannes Klumpers – Head of Secretariat for Climate Adaptation Mission at DG CLIMA – introduced the work done by the European Commission through the Mission on Adaptation to Climate Change, a new initiative bringing together efforts both financially and policy-wise to help regions and municipalities become climate-resilient.

After a thorough explanation of the European policy framework (see picture below), Mr. Klumpers moved on to describe the Mission on adaptation to climate change. 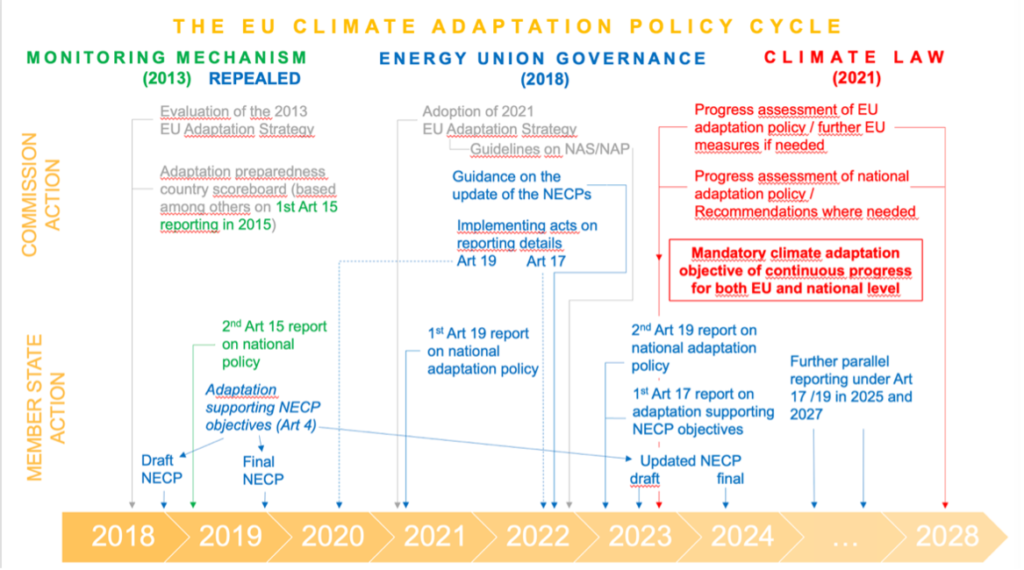 The mission specifically targets regions and cities, the main responsible actors of the many  actions that need to be undertaken to reach climate neutrality. The mission has three main objectives on top of gathering a better understanding of climate risks:

More concretely, the Mission will support the regions in two ways:

A practical example was offered by Tom Lamers, EU Affairs Adviser of the of the Green Metropolitan Region Arnhem-Nijmegen. Tom presented how the Climate Planning is structured in the Netherlands with a strong multi-level governance approach. The Green Metropolitan Region of Arnhem-Nijmegen is a region located in eastern Netherlands and is a cooperation of 18 municipalities, with an economic board representing the knowledge institutions. Its regional strategy has five focusing points: circularity, productivity, connectivity, green growth and leisure (climate adaptation is overarching in all five topics).

The main policy instrument at national level is the DELTA PROGRAMME (which was started as a response to the dramatic sea floods of 1953). A commission was installed to prevent such natural disasters in the future. Its work resulted in a world-known infrastructure preventing floods in the north shore, and in one long term strategy on flood risk management, freshwater supply and spatial adaptation. The programme is structured into decisions (6 years periods), which are themselves translated into plans, which are concrete measures for implementation. DELTA is not a top-down but a cooperation between the national government, the provinces, the water authority, municipalities and knowledge institutions and enterprises.

Spatial adaptation is a special sub-programme of DELTA. This is the context where the region sets up the planning measures for the built environment and rural areas (extreme heat, droughts, etc.). The sub-programme is also translated into a delta decision (2015) which includes plans and policies to make the Netherlands water resilient and climate proof by 2050. A DELTA plan on spatial adaptation was adopted in 2018 to set out goals ensuring compliance with the decision.

The DELTA programme is structured by 40 work regions in the Netherlands. These actors can identify vulnerabilities to weather extremes, act as pilots for stress tests, and set out ambitions and policies to take necessary measures. They also work together with other supra-regions. The 40 work regions are mostly based on a structure based on water basins and rivers. For example, the Arnhem-Nijmegen region has 7 work regions active (making it a very complex structure). One of the first work region is the one around the city of Nijmegen. This work region started working in 2016 and drafted its adaptation plan in 2019 and action plan in 2020. Some big projects are already implemented (e.g. island 4 km long and 200 m wide in the river).

In the Netherlands the adaptation strategy needs to be viewed as a whole – as an important interlink amongst all the levels. However, although multilevel governance seems to work quite well in the Netherlands, there are still some sectors which are difficult to engage (e.g. agriculture with the ban on pesticides).

Branka Pivčević Novak, Head of Service for general Climate protection policy, Ministry of Economy and Sustainable Development of Croatia presented the national perspective. The national level has the role to create the right framework to allow changes on the ground, which is not always an easy task.

Croatia used a co-creation process for reaching a consensus for the national adaptation strategy:  the role of the ministry was drafting the adaptation strategy based on the SEA process (2016-20) with the participation of scientists and experts from universities, media, civil servants, general public, etc. However, it is not always easy to reach a consensus when drafting complex documents which are meant to deal with issues where a lot of scepticism exists. In order to overcome this, the Croatian government involved experts from the meteorologic service, who elaborated scenarios able to show what could happen in the different areas of the country and sectors of the economy in the future if no action was taken. That data was used in workshops all over Croatia, this made people much more involved and interested. Unfortunately, due to economic constraints, this is not easily replicable. More and more work on the ground is done, and policy tools such as Environmental Impact Assessment are a good way to gather data and continue showing adverse effects of climate change.

Finally, Christian Kind, Head of Programme Adaptation at adelphi gave an overview on the “Monitoring and evaluation of the German climate change adaptation and resilience efforts”.  Christian explained the German National Adaptation Process and showcased a detailed timeline of the National German Adaptation Strategy, first published in 2008 and being built upon ever since in a cyclic manner and with the help of the local level. In fact, municipal and regional levels are essential for adaptation however the design of plans saw a very limited active role for cities and regions. Needs are formulated and listened to, however only bit by bit. Barriers are the federal system (which has some advantages, but not in seeing the whole picture) and the fact that adaptation is competing with other important topics (e.g. poverty). It is very important for the national government to fund staff in municipalities in order to increase capacity (not for 1 or 2 years but permanently), funding investments (e.g. infrastructure), providing data (municipalities cannot do it by themselves + economies of scale) and supporting exchange and collaboration. 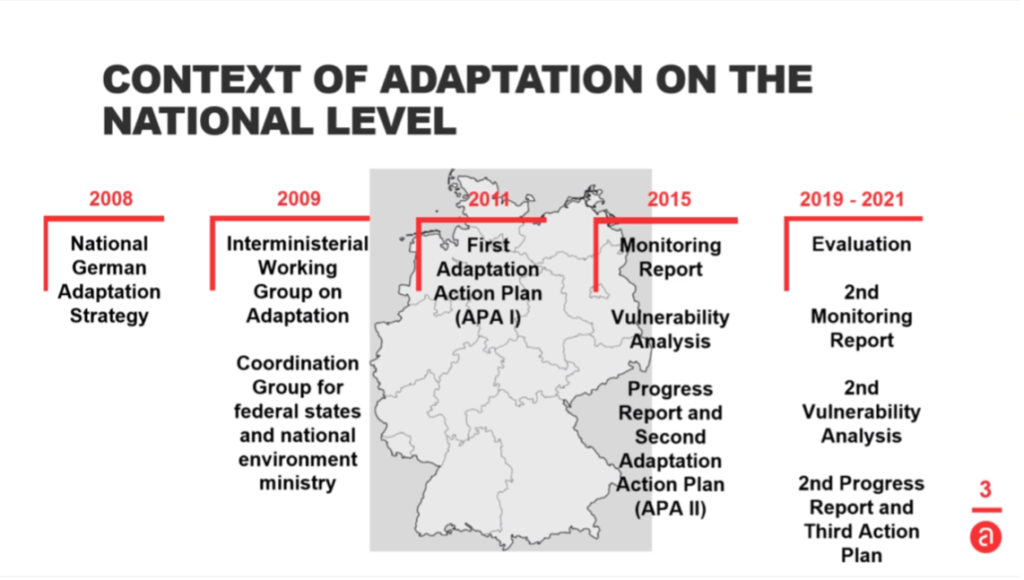 The workshop ended with the Panel discussion “Lessons learnt of the Climate change adaptation and resilience planning, implementation and monitoring process” moderated by Vasileios Latinos Coordinator of Sustainable Resources, Climate and Resilience at ICLEI Europe, where attendees were able to feed the discussion by asking their questions to the speakers.

It was concluded that there is more work to be done, but the geopolitical and economic situation is really rowing against us. The biggest effort should be on capacity building as we are still lagging as a society. Priorities are not there, actions that are planned are not efficient enough – what the EC is doing is good but we really need to invest in capacity building and stop seeing this as an expense but rather as a need.

You can view the full workshop recording below:

By the Autumn, REGILIENCE aims to organize an online workshop, including the 4 projects REGILIENCE, Arsinoe, Climate Impetus and TransformAr, aiming to discuss how the different missions interplay (mainly Mission on Climate-Neutral and Smart Cities and Mission on Adaptation to Climate Change) and work together.

PrevPreviousREGILIENCE organizes a workshop on “Climate Adaptation – European Approach and Success Stories” as an event of the General Assembly of FEDARENE in León, Spain
NextClimate adaptation and resilience on the local and regional level – Croatian perspectiveNext