Resilient Cities and Regions ahead of COP27; what should they expect from COP27 and what should be done to emphasize on adaptation and resilience action? – Opinion article 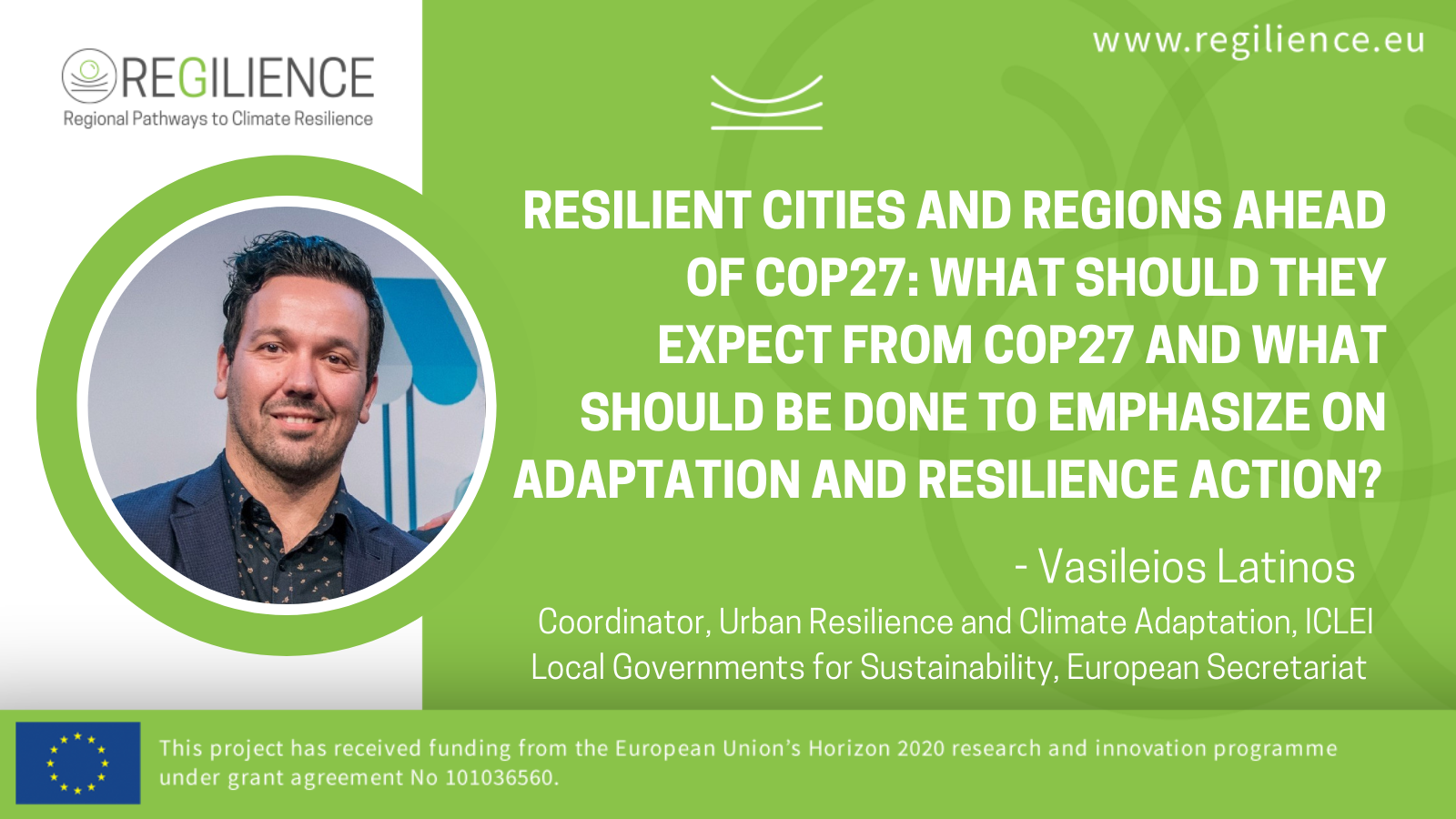 More than 200 local and regional governments and hundreds of their stakeholders will gather in Sharm El Sheikh, Egypt next month for the UNFCCC COP27; they gather once again, like every year, but the stakes are really high this time! As of 1 October 2021, over 2000 jurisdictions in more than 35 countries all over the world have declared a climate emergency, while extreme events are becoming more and more frequent in even surprising locations across the European continent; have you read about the deadly flash floods in the southernmost island of Crete, Greece in mid-October 2022 for example? At least two citizens were found dead and two people are declared as missing after torrential rain brought major flooding to the island. And this has not been the only one; More than 4700 heat stress related deaths occurred in Spain over the summer of 2022, a number that tripled the average of the last five years! One thing is clear – COP27 comes as the continent reels from several extreme weather events, from floods to extensive droughts and increasing threats to food security.

What to expect from COP27?

Regions and cities should, and do expect an action-oriented COP, which will focus further on the practicalities of adaptation and resilience implementation, on disaster risk reduction efforts and approaches to innovative financing, not to mention that they do have high expectations on resilient recovery for Ukrainian cities and regions.

In any case, this COP27 is expected to go beyond climate mitigation and renewable energies! Not to forget, the upcoming COP27 has added focus on Africa’s climate vulnerability as well as the Global North’s non-commitment to its UNFCCC pledges so far. The narrative around an “equitable, people-oriented and just transition” seems to be finally recognised by national governments after years of bottom-up action and activist demands and community struggles. Many African countries, including the event’s host Egypt and the energy-intensive Namibia, seem to be ready to support the move towards a greener and climate-resilient economy, but will also definitely insist on putting Africa’s energy and resilience needs on top of COP27’s packed agenda.

Why is a narrative around an “equitable, people-oriented and just transition” so important now?

This is a game changer definitely, and comes centrally in the COP27 agenda, just when we still need to emphasize on putting adaptation and resilience to the forefront of the discussion!

But is the platform that COP27 provides the real deal for elevated adaptation action by default? Or do cities and regions need to emphasize on their needs, challenges and ways forward they have identified?

Here are some suggestions on what regions and municipalities at COP27 can do to make sure that adaptation and resilience are back for good and in the centre of the international discourse:

That said, the upcoming COP27 may create a fresh opportunity for regions and cities to restore their trust in their national governments, provided that commitments will be respected and clear implementation objectives and targets will be put forward! It will be also critical to highlight the interrelation between fossil fuels, loss and damage and to ensure effective collaboration on market-based financial incentives for low carbon and resilient development and for tackling disasters at regional and city levels!