The REGILIENCE team travelled to the beautiful city of Athens, Greece, for the 9th edition of the European Urban Resilience Forum. The city is one of the oldest to be continually inhabited with over 7000 years of history. The Attica region, which includes the capital of Athens, is home to 3,792,469 people.

In 2022 the country has been severely hit by the effects of climate change. From wildfires, which forced hundreds to flee their homes, to short but intense thunderstorms and rain, which flooded the streets of the city, Athens is particularly susceptible to climate-incited devastation, mainly because 80% of Athens’s ground is not water permeable.

This is one of the reasons why the Athens Resilience Strategy 2030 is so important. Its goal is to prepare and protect the most vulnerable ones from future devastations.

The Strategy is framed by the following 4 pillars, including 65 actions and 53 supporting actions:

“By 2030 Athens strives to be a responsive, embracing and inspirational city that is proud, green and citizen-led. We nurture creativity and innovation, creating prototypes of belonging, bridging history and progress. Athens is a city that listens and speaks with the world.”

During the European Urban Resilience Forum 2022, Mr. Kostas Bakoyannis Mayor of Athens summarized the situation perfectly by saying that “Athens is not bouncing back, it’s moving forward”. Mr. Vasileios Axiotis, Vice Mayor for Urban and Buildings’ Infrastructure and City Planning of the City of Athens, on the other hand, explained that there are currently ongoing regeneration plans in each neighborhood within the city.

Argyro Paraskevopoulou, head of the General Directorate of Sustainable Development and Climate Change, Region of Attica, clarified that the region has a clear plan which sets out immediate adaptation priorities, prioritizing measures and actions to be implemented. The measures are divided into short-term, medium-term and long-term depending on the necessary implementation time. The sectors with the greatest vulnerability, such as water, infrastructure and urban environment are on this priority list.

One such regeneration activity is taking place on Lycabettus Hill, which the REGILIENCE team had the opportunity to visit as part of a study tour. The program aims to breathe new life into this iconic landmark by creating an urban oasis and a spot for recreation. Some of the works being done on Lycabettus Hill include reconstruction and reopening of the iconic Lycabettus Theater, maintenance of the hill’s trails and footpaths, anti-flooding and anti-corrosion works, lighting and road upgrades with the use of sustainable materials.

The images below show one of the adaptation measures on Lycabettus Hill. This place has previously been very risky for the buildings underneath because of falling rocks. This is why wire pallets have been placed, which will then be covered with garden soil and local plants will be planted. The construction will protect the neighborhood below while also promoting the local flora and fauna.

The Omonoia Square has also been rejuvenated and its signature fountain restored. The fountain is believed to be one of the largest ones in Europe when it comes to water volume. The reconstruction efforts were a result of the local authorities wanting to ameliorate the living conditions of the locals and the tourists by creating a “greener” space, which would not only be beautiful but would also cool passers-by during the hot summer months in the city. 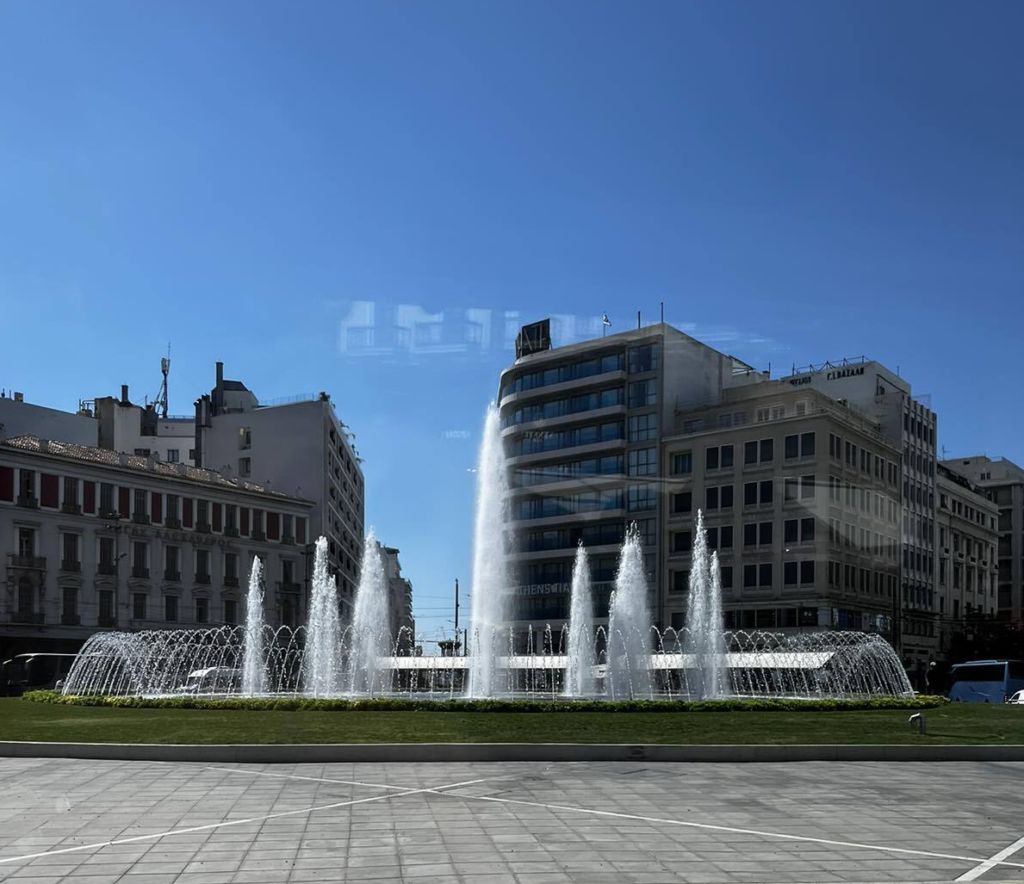 Another thing which made a long-lasting impression on us is that the whole city, including the locals, are striving to make their hometown into an urban oasis. The city is covered by green spaces, parks and trees. Almost every museum has an adjoining garden. Almost every balcony is a miniature greenhouse. Apart from being very picturesque, the plants keep the temperatures in the city lower and promote wildlife.

Building networks and innovation ecosystems for resilience and climate change adaptation are key to ensure Europe can withstand the effects of climate change and conflict. This event was a great opportunity for regions to share their experience and failures and learn from each other.

EURESFO2022’s main organizers were ICLEI Europe and European Environment Agency, co-organizers were the City of Athens, the Google Foundation, with the projects Regreen, Regilience and CoCliCo, supported by the European Investment Bank, Covenant of Mayors for Climate & Energy Europe and EU Policy Support Facility, European Committee of the Regions, Life Programme, Science for Environment Policy, with the projects Ruggedised, Excess, proGIreg and ARCH, in cooperation with Resilient Cities Network and Making Cities Resilient 2030 initiative.

You can access the EURESFO 2022 official photo album here.

PrevPreviousTransformative pathways for a more resilient, regional development in Europe and beyond
NextBeing “creative” about collaboration for climate resilience – Opinion articleNext